When I was a kid (circa 1983, I'd be about 8 or 9), I played the Intellivision game Advanced Dungeons and Dragons: Treasure of Tarmin. The 3-D graphics put you in a first-person-perspective point of view with shocking realism: 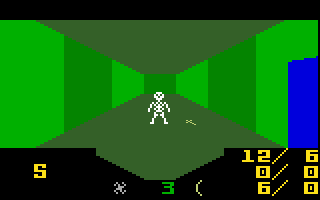 But a year or two later, I got a C-64. And I was able to draw on the 40x25 character grid by cursoring around the screen, setting the color with the Ctrl key and a digit, and putting symbols anywhere I wanted (why doesn't bash let me do that?). The character set had triangular components and solid block components. 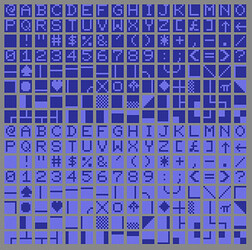 So I was able to reason through how one might generate a rendering of one's perspective in a grid through that medium.

In 2013, I found the nearly-three-decades-old spec, in spiral-bound notebook paper, about "Dungeon Construction Set": 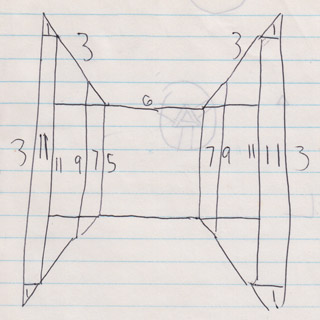 (Careful readers will notice that while it's almost right, this doesn't quite hold together on the slanted parts...)

Though Treasure of Tarmin was played on a grid, the walls existed only on the edges of grid squares. Having learned what bytes were, I realized that if I made the map out of bytes...then each square on the map could have four possible states for each of its edges:

The design allows for the opportunity that adjacent cells would "disagree"...e.g. have a wall on one side and a door on the other. I considered this a feature; these situations would give rise to one-way doors and walls that didn't appear until you passed through them and then turned around.

My idea was that a position on the map and a direction you were facing could "light up" regions on the screen...a bit like lighting up segments of a digit on an LCD.

But an implementation of the ideas eluded me. It was a trickier program than I had written at the time, made even trickier because I was trying to implement it in a "machine language monitor". I had no assembler, and the book I read didn't discuss them...just the instruction set and workings of the 6502 chip.

(The machine-language-monitor programs could encode single instructions into specific memory locations. But unlike an assembler, it had no labels or other abstractions...all addresses had to be kept track of on paper.)

By the time I knew enough about programming that I could do something like this in an evening, I no longer cared much about the idea. But better late than never, right?

Although Unicode/ASCII don't have good "seamless drawing" characters to do this like the C-64 could, it can still get the idea across.

I decided I'd use this relatively simple task as something where I would use Red the whole time--as opposed to writing it in Rebol2 or R3-Alpha and then porting the differences. So that let me get a sense of where the pain points were regarding things like syntax error reporting, that sort of stuff.

Anyway, about a decade later, it's now a Ren-C sample. Minor modifications were made, including taking advantage of the ReplPad's CLEAR-SCREEN ability (if running on the web).

about a decade later, it's now a Ren-C sample. Minor modifications were made

It's probably worth mentioning what I had to change:

It's a deliberately simple program, and it does not make use of PAIR! and its X and Y fields (possibly because Red didn't support it at the time? or maybe it was and I didn't use it).

It builds empty strings with loops instead of using APPEND/DUP or some similar construct (also, potentially because Red didn't have /DUP yet).

I'm hesitant to go on any kind of enhancement kick for this. But it could mock up a more C-64 looking square-with-slants screen in the JavaScript canvas, and do the dark green/light green alternations of Treasure of Tarmin. Could add the blue doors...

Switching to a READ-KEY interface where you can use cursor keys and not get echo would mean adding the READ-KEY features to ReplPad. I like having the fallback so it runs in a stdio terminal that doesn't have anything but echoing input and irreversible printing. So it should do feature detection and work in both (kind of like how it does feature detection of CLEAR-SCREEN).

If there are any takers who want to improve it (or the ReplPad features to enable it), be my guest.