I decided I would do a small task in the web Ren-C build, which is to take the "Portable Bridge Notation" for representing a deal of a hand of cards, and turn it into blocks of symbolic data representing each player's hand.

The notation is pretty straightforward, e.g.

Separated by spaces are the cards for each of 4 hands. The suits are separated by dots, and the order is clubs.diamonds.hearts.spades. T is used for 10, while J/Q/K/A are the typical Jack/Queen/King/Ace. The first letter is a direction (N=North, E=East, S=South, W=West) of which player the first hand represented is for. 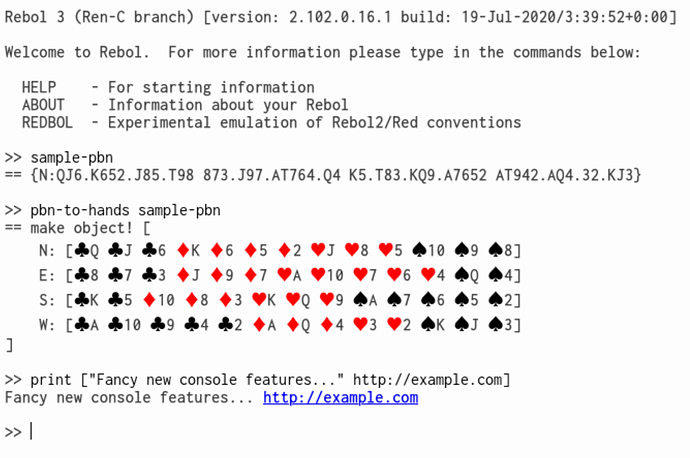 (console escaping is now done by Rebol code, so this shows some colorization and live hyperlink as an example of what we might do with that).

I wanted the PBN conversion to be accessible and demonstrate "best practices". Here's what I came up with:

Conceptual Problems Encountered While Writing This

This is pretty straightforward as tasks go. And certainly the PARSE-based code is more pleasing to look at than many versions. But I'll list a few gripes.

Technical Issues Encountered While Writing This

I deliberately chose to use the UTF-8 characters for card suits in the code. Partially to make it look "cool", but also to exercise the code paths.

One of the big problem areas with doing so was the Windows Console. If I tried to paste any code containing the card suits, they'd be invisible. This is because the console layer has no idea what a PASTE is, so what Windows does is it simulates key-down and key-up events for every character as if you were typing them. They must have gotten something wrong, because the card suits were not getting key downs... only key ups. Others have faced this problem and worked around it., so I incorporated their workaround.

Next is that I got it in my head that I wanted to use the lighter notation of 'N to match a letter in the input rather than "N" or #"N". It's 3 fewer apostrophe-style marks than a string, and it seems there's no harm in allowing you to match WORD!s against strings. After all, Rebol2/Red/R3-Alpha allow you to FIND that way:

So I went ahead and added that ability, for both WORD!s and INTEGER!s in strings. This kind of opens a can of worms--as we might ask why looking for an INTEGER! in a string wouldn't be searching for the codepoint. But you can do that with find some-string to char! some-int. BINARY! is another story, and with doors open for searching binaries for strings it's the case that searching for integers finds the byte value and not the string-ized representation of that integer as ASCII. It's something to think about.

I decided to use COLLECT, but when I did I realized the thing I was collecting was not KEEPing material from the input, but a synthesized card symbol. The KEEP we had has the default interpretation of assuming you mean a pattern:

@rgchris and I have been discussing the three things you might want to do with DO-style code embedded into a parse:

So the answer with this setup of "match a but keep b" would look like:

Whatever our beliefs about notation, these are desires you can have. In this case I made :[] work as described so I could keep my synthesized data.

I wanted to make the KEEP rule look like:

Because I had the idea that if you matched a WORD! in your text input, that the SET would come back as the WORD! for the character... not the character itself. This is a concept that needs to be thought out more, because I'm not sure we completely understand the rationale discerning SET and COPY and what their behavior should be.

As usual, Rebol-ish code can be nice to look at once it's written...but the path to getting there can be pretty hard. As usual: a debugger would really help.

Cards usually are written the other way, as 4♠ and not

4 (something about rendering in Discourse seems to think the latter notation is worthy of a much bigger spade...no idea why, might be worth finding out). But that would not be legal as a Rebol WORD!. The impedance match of such things is not a unique problem of Rebol, and there are more options like <4♠> while most languages would just have one string type. But it was a bit disappointing nonetheless to have to make the concession.

Tag! doesn't seem all that bad an option, nor does reversing as

Returning OBJECT! still makes me uncomfortable, as I feel there's a real inelegance to the single OBJECT! coming back as MAKE OBJECT! [...], and it goes out of the domain of concrete parts fast. I'm worried about adding methods and having that look ugly. I've written about wanting to maybe find some grand unifying theory where OBJECT! is just some constrained optimized BLOCK!. But that feels distant. In short, I'm just a bit torn over the return format here... I want to feel like we made it better than the PBN, not worse.

What about Map! ?—seems that is positioned as the more structured Block! within data structures where Object! is more for carrying class-like logic.